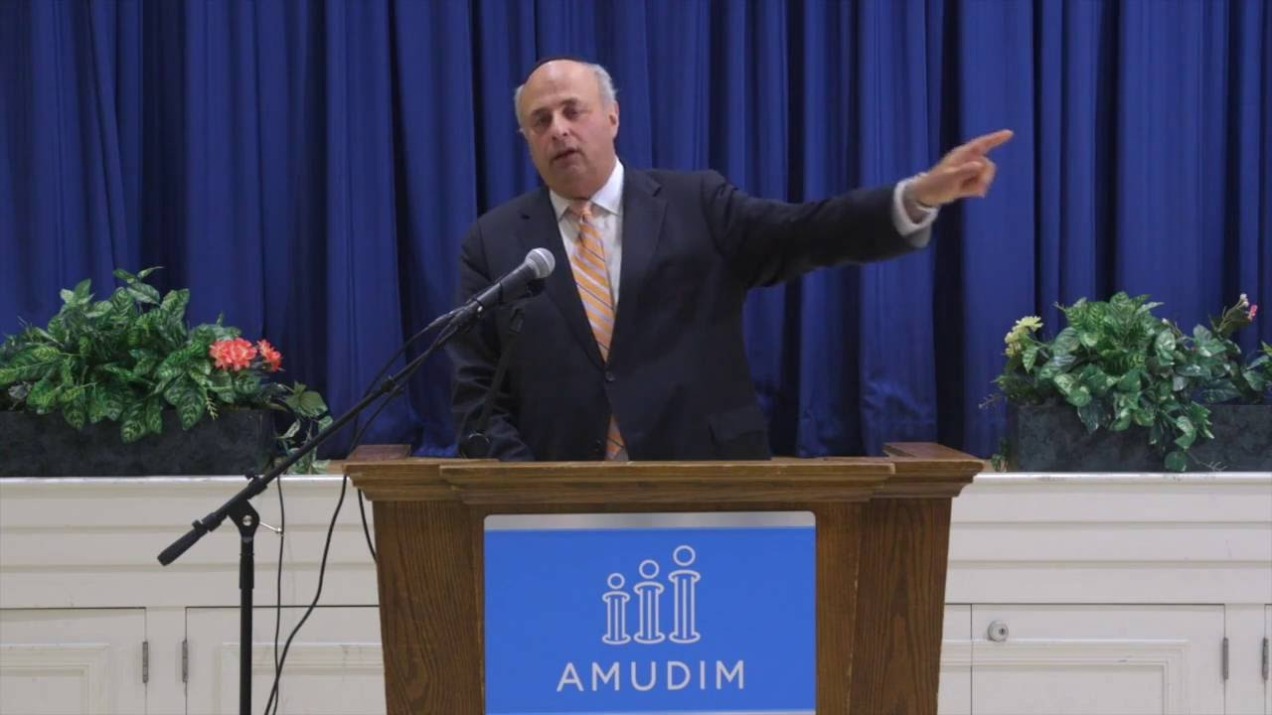 In May of 2012, Evan Zauder, then a rabbinical student at Yeshiva University and 6th grade teacher at Yeshivat Noam in Paramus, NJ, was arrested for receipt, possession, and distribution of child pornography, and for using the Internet to entice a minor to engage in illegal sexual activity. He pled guilty in January of 2013 and was scheduled for sentencing in April of 2014. Prior to his sentencing, there was an outpouring of support by many leaders in the Orthodox Jewish community.

Dr. Pelcovitz is something of a standout in that group because of his renown as an advocate for survivors of child sexual abuse. Dr. Pelcovitz has spoken at countless conferences and seminars on the topic of child protection and abuse prevention education and is considered by many to be a leader in the field of abuse within the Orthodox Jewish community. He currently sits as the chair of the board of advisors for Amudim, the largest Orthodox Jewish victim services organization in the United States.

In his sentencing recommendation letter for Zauder, Dr. Pelcovitz stood on his extensive credentials and experience when he wrote, “…I spent most of my career treating the victims of child sexual abuse in the specialized clinical and research program that we has at the North Shore University Hospital, which was then part of the NYU School of Medicine. In light of this expertise and the qualities I saw in Evan when he was my student, I hope that this letter can provide a perspective that can help justice be tempered with mercy when Evan is sentenced.”

He then went on to imply without saying it that he had seen Zauder clinically following his arrest, which was not the case:

“In my interactions with Evan during and after class, what came through most, was his warmth, empathy, concern for others and genuine commitment to serve the community. In my meeting with him after his arrest he wasn’t in the least bit defensive about his actions. He expressed sincere regret and remorse, wishing that he has the strength to get professional help for his problem before they reached the disastrous proportions that brought him to your courtroom.”

In other words, Dr. Pelcovitz had no knowledge whatsoever of Zauder’s crimes while he was his student, and never treated him clinically.

Dr Pelcovitz continued, having never seen Zauder clinically, “In over thirty years of practice, I have had the opportunity to treat many individuals with issues in the area of controlling their sexuality. As you know, the prognosis for sustained change is often guarded. In the case of Evan, however, I believe that he possesses many of the ingredients that I have come to associate with sustained change and potential to be a valuable member of society…”

He then proceeded to ask the judge to give Evan Zauder the minimum possible sentence.

Setting aside the fact that this level of concern is rarely shown for victims of sexual abuse within the Orthodox Jewish community, Dr. Pelcovitz’s letter was particularly disgusting to the survivor and advocacy communities because most people would agree that someone who claims to be an advocate on behalf of survivors should not be writing sentencing recommendation letters on behalf of abusers, especially when that advocate deliberately attempts to mislead the court into believing that the basis for his opinion on the abuser is clinical rather than personal.

But what’s even more concerning about Dr. Pelcovitz is that this is far from his first questionable decision with regard to sexual abuse.

In 2011 after Agudath Israel published its halachic ruling requiring survivors of child sexual abuse to ask permission of a rabbi before reporting to the authorities, they rolled out a companion plan to implement abuse prevention measures in yeshivas. This included mandating windows in all classroom doors, advocating for cameras in classrooms, instituting basic child safety protocols, and organizing abuse prevention events for parents and teachers around the community.

One of the speakers on Agudath Israel’s circuit for this campaign was Dr David Pelcovitz. In May 2012, Dr Pelcovitz was speaking at such an event alongside Debbie Fox of Magen Yeladim, and David Mandel, CEO of Ohel. Following the event, a parent approached Dr. Pelcovitz and asked him what to do if he becomes aware of a molester. Dr Pelcovitz then admits that the panel purposely didn’t touch on the issue of reporting child sexual abusers to the authorities because they were told not to by the organizers of the event.

In a 2017 presentation for an abuse prevention event for CHANA, a Baltimore-based Orthodox Jewish community helpline for survivors of abuse, Dr Pelcovitz spoke about the importance of having frank conversations with children about their right to assert themselves in unsafe situations. He added the caveat that it should be done in a way that isn’t “chutzpahdik,” or disrespectful:

This is something that flies in the face of any recognized best practice where abuse prevention education is concerned. Children, when asserting themselves in an abusive or unsafe situations, should not be burdened with the responsibility of being concerned with the feelings of the adult who is making them feel unsafe.

Last Wednesday, following the arrest of SAR associate principal Rabbi Jonathan Skolnick for production of child pornography, Dr Pelcovitz was brought in by the administration to address parents’ concerns in the wake of the arrest. Information had surfaced the day before Dr Pelcovitz’s presentation that a number of students had been contacted by Rabbi Skolnick through several of his aliases. Within the first ten minutes of his address, Dr Pelcovitz was asked about his letter of recommendation for Evan Zauder.

His response to the inquiry was defensive, dismissive of the severity of his actions, and annoyed at being asked the question at all.

He began by characterizing his plea to the court on behalf of Zauder not as an appeal for a shorter sentence, but as an appeal to the judge to “temper justice with mercy.” He describes being asked by Zauder’s attorney and therapist, whom Pelcovitz admitted to having relationships with in the past, to write the letter. Dr. Pelcovitz then went on to explain that his “working supposition, based on what I was told and based on what was released to the public at the time,” was that Zauder had been in possession of child pornography, but not that he had “actually abused.” “Had I known that Evan had actually abused,” Dr Pelcovitz said, “which is something I didn’t find out until much later, I never, ever, would have written the letter.”

It should be noted that the information was public at the time, and had not only been in the release by the Department of Justice, but had also been in several news outlets at the time, and that Dr Pelcovitz had specifically requested the minimum legal sentence in his letter, despite claiming otherwise in his presentation.

Dr Pelcovitz then finished with an aggrieved challenge to the attendees:

“There are other background reasons that go behind my writing that letter that’s extremely frustrating to me that I can’t share—and I don’t want to sound at all defensive—but basically it was a mistake, it was a big mistake, and I apologize for that mistake. Ok? We hear it? Anybody wanna yell at me or push back on me? Ok? We’re good?”

Following the presentation, several parents complained to the SAR administration about the tone-deaf irony of having someone who wrote a sentencing recommendation on behalf of a child sexual abuser convicted for luring a 14 year old to have sex with them and possession and distribution of child pornography speak to parents in the aftermath of such a similar case.

But the issue isn’t necessarily that SAR reached out to Dr. Pelcovitz as a trusted and well-known expert in the dizzying aftermath of their associate principal’s arrest. It’s the fact that he remains a trusted expert despite his very questionable history of collaborating with Agudath Israel following their psak, deliberately failing to instruct parents of their responsibility to report sexual abuse to authorities, writing a sentencing recommendation letter for a convicted pedophile, and advising parents that they should instruct their kids to not be chutzpahdik when asserting themselves in unsafe or abusive situations.

While there can be no doubt that Dr. Pelcovitz’s credentials are impressive on paper, in practice his record gives cause for concern. He is by far not the only recognized expert in the Orthodox Jewish community on child sexual abuse. However, he is one of several recognized experts who seem to have other priorities where child sexual abuse and prevention and institutional and communal concerns intersect.

Advocates on behalf of survivors of child sexual abuse must have only one concern, one priority when addressing the needs of survivors: The best interests of children and survivors. How to secure justice for them in the wake of abuse, how best to support them when they come forward, and how best to prevent them from being abused in the first place. Concerns about chutzpah, or institutional finances, or communal image have no place in an advocate’s priorities. Dr Pelcovitz’s record on this should be of great concern to any school administrator or community leader looking for a recognized expert to address parents or teachers about child sexual abuse and prevention.