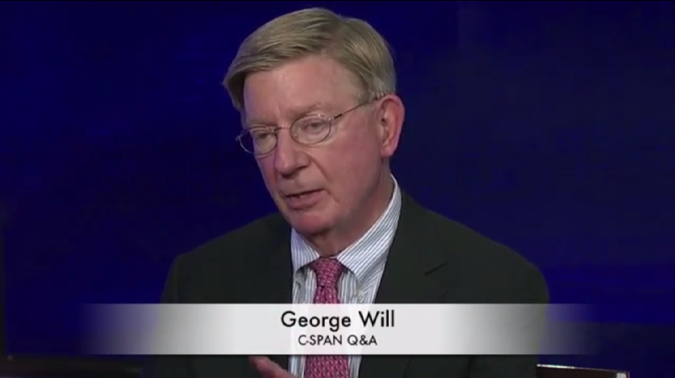 Some people just can’t be wrong. They can’t just take the criticism, admit they were wrong, apologize, and move on. Early on in blogging I learned that being wrong is a good thing—it means you learned something new. Knowledge is power. Well, I suppose no one could accuse George Will of being power hungry.

Following a Washington Post oped piece in which he called sexual assault “victimhood a coveted status that confers privileges,” George Will appeared on C-SPAN’s Q&A to respond to the outrage expressed over his article. Anyone hoping for an apology, or at the very least a clarification, had another thing coming.

Will opens by calling the people who vocally disagreed with his piece “the rabble.” I had a response prepared for that remark, but one commenter, ModerateRepublican, in the response section of The Blaze article, took the words right out of my mouth:

So one thing is certain: the “rabble” he talks about probably includes virtually every woman on the planet earth.

Try this: [T]ell a female that you think women want to be raped because of the status and privileged they get by being raped, and see how she responds.

Next he incorrectly quotes a New York Times article citing the “1 in 5” statistic, stating that “The [Obama] administration has said that 1 in 5 women experiences sexual assault.” Using that statistic, he then goes on to discredit it by extrapolating from the 12 percent reporting rate mentioned in the Times article that were the two statistics correct, either the number of assaults—at the one college from which he too numbers, Ohio State—should be higher, or the number of reports should be lower. Had Will checked the New York Times article off of which he built his straw-man argument, he would have noticed that on April 30th, the Times printed a correction on the article stating that the 1 in 5 statistic it had quoted had not applied to assaults on college campuses, but to experiences over the lifetimes of women in general. Will’s Washington Post article was published on June 6th.

Moving along, Will then contends that new evidence standards set by the administration for college disciplinary hearings—preponderance of evidence—is too low, and will therefore result in false accusations. He argues that the evidence standards should be, as it is in the criminal justice system, beyond a reasonable doubt. The new evidence standards in question were suggested by the Department of Education in a “Dear Colleague” letter sent on April 4th, 2011 to colleges across the country. Interestingly, these new standards George Will is complaining about, have been standard practice for more than a decade in college disciplinary hearings. A guide published in 2003 by the Foundation for Individual Rights in Education (FIRE) states that “The vast majority of schools employ, at the very least, a ‘preponderance of evidence’ standard.”

College disciplinary hearings are not court cases; they do not bear the same penalties, do not adjudicate the same crimes, and do not have any bearing on the criminal justice system. Therefore, the criteria for adjudication are, and have always been, much lower. Either Will is advocating for “beyond a reasonable doubt” to be adopted for all disciplinary matters because he truly believes that such a high standard is required for any disciplinary matter, or because he’s jealous of the status and privilege conferred on sexual assault victims, and wishes to minimize the number of people who can officially claim that privilege.

Actually, the only thing George Will got right in the whole interview, was when he said that sexual assault cases should not be adjudicated by colleges at all, and should instead be handed over to the criminal justice system. The Rape Abuse and Incest National Network (RAINN), in a February, 2014 recommendation letter to the Obama Administration’s White House Task Force to Protect Students from Sexual Assault, recommended that instead of internal disciplinary hearings, colleges should “use the criminal justice system to take more rapists off the streets.”

There is no reason why crime should carry a different penalty or process simply because its perpetrator had the good fortune of committing his crime on a college campus. College campuses should not play haven or sanctuary to people who deserve to be prosecuted to the fullest extent of the law. Internal hearings instead of proper trials only serve to encourage abuse and discourage reporting. It should be noted that the reporting rate off college campuses, as reported by RAINN, is 40 percent. Compared to that, the 12 percent reported on college campuses is a horrifying pittance.

Ever the advocate for unfortunate young men who wouldn’t know consent if it slapped them in the face, Will blames a “sea of hormones and alcohol” for what will, when coupled with these “new” disciplinary hearing guidelines and recommendations by the Obama administration, result in “charges of sexual assault, and…young men disciplined, their lives often permanently and seriously blighted by this, and…litigation of tremendous expense as young men sue the colleges for damages done to them by abandonment of the rules of due process that we have as a society[.]”

Will seems to have a hangup with the fact that women drink on college campuses, and still have the gall to expect sex not to be forced upon them while in a state in which they are unable to consent. Perhaps, instead of worrying so much about the money that college campuses may lose as a result of disciplinary actions which may or may not be based on allegations resulting from accusations some feel are ambiguous since the notion that a person too drunk to stand straight is somehow able to give consent to sex, to them, is laughable, colleges should instead focus on educating its students on what constitutes clear and affirmative consent. The fact that men on college campuses never have to worry about being raped if they consume too much alcohol at a party should attest to not only the existence of a problem, but a pervasive rape culture which permeates college campuses.

Lest you think for a second that George Will doesn’t care about sexual assault, he assures us all that he cares even more than we do. He cautions against “defining sexual assault so broadly…that it begins to trivialize the seriousness of it,” thus implying that a case where a man as sex with a woman who is too drunk to consent, is somehow too trivial to be considered rape. The FBI disagrees.

The new Summary definition of Rape is: “Penetration, no matter how slight, of the vagina or anus with any body part or object, or oral penetration by a sex organ of another person, without the consent of the victim.”

Seems to fit pretty handily into the legal definition of rape.

Finally, he concludes by bemoaning the death of civil public discourse and trying to invalidate all of the outrage at his public display of ignorance, by holding up a few examples of people who said they wanted him dead for what he had said, or that he should be raped to know what it feels like. This is a common political trick in avoiding very real issues by focusing on the crazies on the sidelines, and projecting their extremes onto any intelligent and legitimate disagreement.

Honestly, I don’t know why I expected better of George Will. There are an unfortunate number of people who believe, as he does, that rape must fit a very specific template to be considered valid, thereby subscribing to a culture which not only discourages victims from coming forward by telling them that what happened to them was their fault, but also creates a climate in which an abuser feels comfortable and secure in the knowledge that even if his crimes are reported, he will likely receive no punishment. Rape culture fosters abuse, and environments which breed abuse. Columns and interviews like George Will’s attest to a complete unwillingness to dispel the ignorance and backward opinions that women’s rights and anti-abuse activists have worked decades to eradicate. Apparently abusers are more worthy of support and erring on the side of caution than victims. And he wonders why only 12 percent come forward.