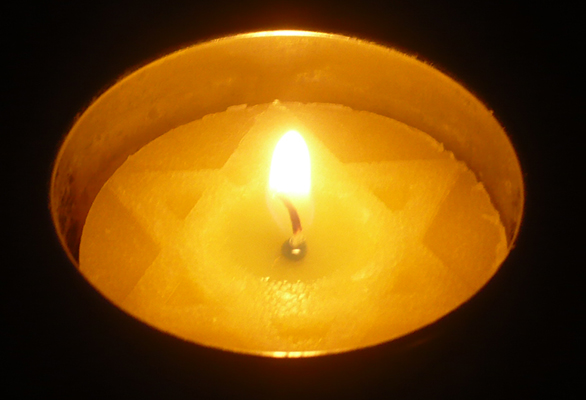 Author’s note: I know people find this topic very sensitive, so I would like to open with a disclaimer. It is not my intention to compare any two tragedies, only to derive, if possible, some meaning from my and my grandfather’s experiences.

I was raised by Holocaust survivors. I was fed a steady diet of heroic stories of those who died at the hands of the Nazis. The Holocaust was always portrayed as something horrific that had been done to us out of hatred by the Nazis, sanctioned by God for some indeterminate reason, which, much like the process by which nature produces diamonds, beat, burned, and forced the best out of the Jewish people. To this day I still can’t sing ani maamin without crying, as I picture the lines of Jews walking toward their deaths, defiantly singing that haunting yet hopeful song, a song that told both the Nazis and the Jews still left in the camps, that no matter how dark the night, dawn will come. I was raised believing that this was the norm during the Holocaust, and that the Jewish people, even when cast down into the lowest and most hellish of depths, still not only overcame, but rose higher, and became greater than they had been before.

Then I grew up a little. I read Elie Weisel. It hurt me to read the way he described what Jews did to each other during the Holocaust. None of us have a right to judge anyone who lived through that period (certainly not any more than we have a right to judge anyone in whose shoes we haven’t walked), but the depravity to which so many sunk floored me. It hurt me. It shattered my image of pious men with long beards and fiery eyes marching proudly to their deaths, God in their hearts and faith on their lips. I read accounts of Jews who collaborated with Nazis, outed other Jews in hopes of saving themselves. Jews who took advantage, sexually, of other Jews. Jews who participated in the torture and beatings of other Jews. I’m crying as I write this because I’m mourning the innocent part of my soul that died when I learned these things.  My grandfather, in all the stories he told me as I lay on the couch in the dining room after our Friday night meals, never once mentioned any of this.

Or maybe he did. Maybe he did begin to scratch the surface of the darkness surrounding the real story of the Holocaust. Maybe he did begin at the time to temper my starry eyed reverence of people whose strength was indeed legendary, with stories of those who were not as fortunate. He told me about the people who managed to get as far as the fences and instead of trying to escape, flung themselves at the fences, killing themselves rather than suffer another day; about the people who committed suicide immediately following liberation because they couldn’t imagine life after what they had experienced. Perhaps the rosy image I grew up with was a manifestation of a child’s mind, reinforced by the hagiographies recounted through spruced up stories of rebbes and chassidim.

It took years until I could reconcile the two sides I know about the Holocaust. I’m still working on it. But my life thus far has provided me some insight to the power, for good and for evil, of trauma and tragedy.

There’s something transformative about pain, I’ve found. It drives us to our extremes. People like to ask themselves, as I have many times, “What would I do in that situation?” I like to think, as I’m sure most people who consider this question would, that they too would die heroically, giving their lives in defiance of a genocidal oppressor. Others are very clear in their position: They would either be one of those killed immediately, or they would defect to the other side out of sheer self-preservation. The real answer? It’s impossible to know. Tragedy takes a person, spins him around, confuses him, and then exaggerates whatever’s left when the spin cycle stops. It turns your life upside down. What you believed before no longer seems important, and what you knew no longer seems true. You’re left having to rebuild yourself from scratch.

Pain and tragedy breaks, to some extent, everyone it touches; that part is always the same. What subject to change is the aftermath, the part where you rebuild yourself. It is possible to transcend pain, transform it into something beautiful. Eric Weiner, in his book Man Seeks God, describes a man named Pieter, whom he met on his travels. Pieter’s son died a few weeks before he was set to graduate high school. He tried running from his pain, biking from Holland to Turkey, cursing the world, God, the Higher Power, what have you, as he went. As he traveled, the people he met realized his pain and took him in for the night, fed him, gave him shelter. “It was beautiful,” said Pieter. “There is pain. There is beauty. There is help.” Pieter transformed his pain into an art form and became a dervish. Weiner describes what he saw in Pieter as the “Alchemy of agony. Suffering not blunted, but transformed.” Pieter discovered a purpose to his pain, not necessarily an explanation or a reason, but a purpose: a way to transform something terrible into something beautiful.

My grandfather transformed what he experienced in the Holocaust into something beautiful. I saw it in his eyes every time he looked at his grandchildren. The proud defiance, the purpose to his pain, the ultimate good of his suffering. He saw us as not just a replacement for the lives lost in the Holocaust, but as a transcendence of what was done to him, a living testament to the possibility of hope and rebirth in even the darkest places. We have a very large family. I have close to fifty first cousins, many of whom have children of their own. So many children, in fact, that I’ve lost count.

Unfortunately, my little part of the family went to hell pretty early. I don’t have much to do with the rest of them. When I was approximately one year old, my grandfather guessed what would happen to me if I stayed with the family—with my mother—and arranged for my sale to another family. I was to be sold for $1 million to another Jewish family in the area. My mother was in a mental institution at the time, and the transaction was supposed to happen before she got out. It didn’t. She found out and stopped it. For some reason she saw fit to tell me this story as a young child, no doubt she thought it would illustrate her “love” for me. Now that I’m older, though, and can appreciate its significance, there’s something that bothers me about it. Most people wonder about what would have happened to them had they been born into a different family, or in a different era. Generally the question is purely theoretical, but in my case it was almost a reality. I wonder, sometimes, if I could go back and make sure the sale was completed, would I?

It’s a tough question. On the one hand, I may have had an easy life. The family buying me would have undoubtedly have had a lot of money, evidenced by the spare million they were apparently willing to spend on me, odds are they wouldn’t have abused me the way my family did, and I would have led a very simple religious life. On the other hand, perhaps I would not be the person I am today. Then again, perhaps I would be. Perhaps I would still be the writer I am today, with all the same insight and understanding, the same curiosity, the same combination of belief and skepticism with which I try to approach every situation. Perhaps. Then the question becomes, is it worth it? Is everything I’ve suffered worth what it may or may not have made me?

I don’t have a concrete answer yet, but even that’s progress. I’ve gone from wanting to be dead to using what I’ve learned to try and help others currently experiencing what I’ve experienced. I honestly don’t have an answer to whether or not it was worth my life to be the person I am today, but until I have the answer, I still have my pain and what it made me. I’m not sorry for what I am now, even though I may sometimes wish what I am now would never have been necessary.

Yom Hashoah is an interesting day for me because on the one hand I can’t ever imagine myself living through that kind of hell. I can’t see myself surviving it. To build a life afterward is, to me, unfathomable. And yet, it happened for so many. For many it didn’t, but for so many it did. They came here, or moved elsewhere and build homes, businesses, families, fell in love, wrote, sang, cried, laughed—they not only lived but transcended; they became everything the Nazis tried to take from them. Those who didn’t magnify the tragedy. I still have no idea why some people can transcend their experiences and some can’t. I don’t believe it has to do with mental, emotional, or physical constitution. I honestly have no idea what determines who transcends their pain and who doesn’t. I leave that up to God. What Yom Hashoah represents to me is not only a memorial of the people who died, the people who fell, and the people who suffered, but the people who rose, the people who built, the people who transcended. To me it represents hope.