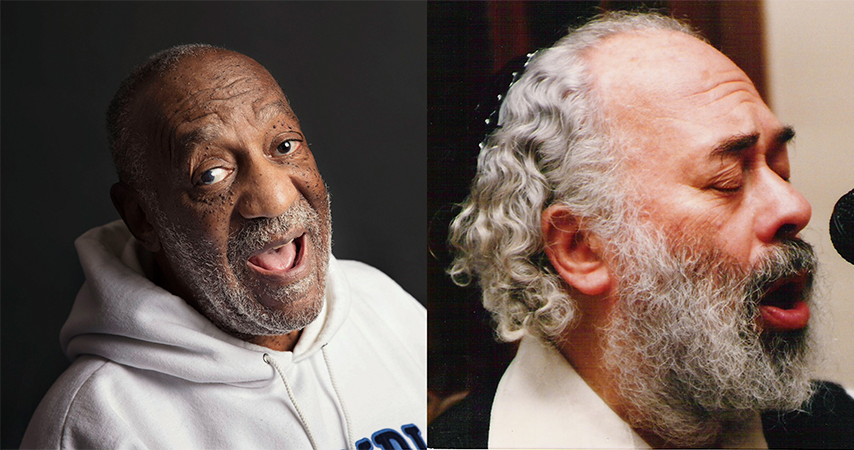 UPDATE 12/8/2014 6:30 PM: Since posting this article last night, I’ve been contacted by quite a few people with firsthand accounts of Carlebach’s abuse, specifically, inappropriate phone calls, inappropriate flirtations, and most seriously, molestation of minors.

A few weeks ago, my shul (synagogue) held its annual Carlebach Shabbos. Benzion Miller, the Aron Miller Memorial Choir, and roughly 1,500 people showed up to sing, and dance, and celebrate the life, music, and legacy of Rabbi Shlomo Carlebach. There’s no question that Shlomo Carlebach touched the lives of tens of thousands with his music, his passion, and his apparent utter devotion to God and the Jewish people, and returned souls to Judaism at a time when religion seemed on the decline. But there was a darker side to the legend, a side that forces the uncomfortable question: Can we separate the man from the legacy—the art from the artist?

So there I was, sitting in my pew, 1,500 people around me, all singing Carlebach. I couldn’t help myself. It’s impossible not to sing along. The melodies are beautiful in their simplicity, saturated with soul, and electrifying in crowds. It’s impossible not to be swept up in the frenzy. My fingers drumming along to the melody, my feet tapping, a smile tugging at the corners of my mouth despite my best efforts to the contrary, I sang along with everyone else. How could I deny it? In a room filled with people from the far-right to the far-left to the non-observant, all singing the same music, all united in a way they have never been before, and will likely never be again, how could I not be swept up by the crowd? Men in shtreimels (circular fur hats worn by Hasidic men) with long, untrimmed beards, dancing with their fellow Jews, some wearing knit kippot (skull caps), some with ponytails, some in suits, some in jeans and a t-shirt; has anything, in the history of the Jewish people, ever united people so different, than the music of Shlomo Carlebach?

Following the service was a Carlebach dinner held at a local catering hall, with our scholar-in-residence, Rabbi Sammy Intrator, Carlebach’s long time right hand man. He started the night off with a song, and once the crowd was warmed up, he began to talk about Reb Shlomo. He told us story after story about Reb Shlomo’s compassion, his love for his fellow Jew, how deeply his desire to foster peace and love in this world ran, and how in-tune his soul was with God and the world. In true Carlebach style, he told us some of the stories that Carlebach used to tell, singing them exactly as Carlebach used to, bringing them to life with as much of the emotion and heart as he could. Carlebach’s stories always make me cry. As hard as I try not to, they always manage to get me.

Carlebach had an amazing gift for touching the souls of people with his stories of Chassidus (a more spiritual and mystical approach to Orthodox Judaism), and how the simplest Jew could have the greatest impact; his stories keep alive the memories of fallen communities and dynasties that perished with time and in the Holocaust, and the memories of the great men and women that would otherwise be forgotten. You would have to be lacking a soul not to tear up at the story of Chatzkele Lekavod Shabbos. And as I sat there listening to Sammy Intrator reincarnate Carlebach so beautifully for his very captive audience, I felt a little dirty. My holy brothers and sisters, I remember—I REMEMBEEEEEEEEEER—the Shlomo Carlebach that I grew up hearing so much about, the great man who reunited Judaism in the Diaspora, but I also remember the Shlomo Carlebach who fondled women who came to him for guidance, who masturbated on women who worshipped him, and who covered it all up by telling them that they were holy, and special. I remember the stories I’ve heard firsthand from people who experienced the darker side of Carlebach. And as I sat there laughing and crying as Sammy Intrator spoke, I felt myself tearing apart.

A battle was raging in my head: How can you sit there and listen to this when you know what he really was, and what he did to those women? But, but, look at the holiness he brought to this world, the people he united, the masses he returned to Judaism, the power of his music, and the strength of his enduring legacy! Yeah, but his legacy was built on the backs of an endless string of victims! But, but look! Look at all these people, singing, and crying, and laughing, and loving, and opening their hearts to one another! Surely that must count for something! Maybe, but who will remember the victims, and how is it right to sit there and tacitly support a man who caused so much damage?

Honestly, Carlebach is a difficult subject for me. My inner conflict was punctuated by the recent resurgence of rape allegations against Bill Cosby. I loved Cosby. I loved his show, I loved his comedy, I loved his smile, I loved what he represented. Just like I loved Carlebach. It’s always this way. It’s always the people you love the most who hurt you the worst. Of all the people who had to be sexual abusers, of course, it had to be Shlomo Carlebach, and Bill Cosby. Right in the childhood. Right in the heart. Cosby is easier for me to throw under the bus, because while I’ve enjoyed his work, it’s never touched my soul. Carlebach is special to me. Carlebach represents a Judaism I’d love to see in this world. I mean, I suppose he would, if not for the small matter that he was a sexual abuser. Why does it have to be so difficult.

Both Cosby and Carlebach got away with what they did for so long because of how loved and cherished both they and their work were. But can their work stand alone? Is it possible to separate the art from the artist? It’s an ongoing question for me. On the one hand, I see the beauty that Carlebach brought into the world, and I don’t want the world to suffer the loss of what Carlebach gave it because of his sins. Perhaps the beauty, and holiness he facilitated was there already, waiting only to be discovered and brought to light, and he was only a conduit. Perhaps we would have had it through someone else, someone less flawed. Perhaps we should therefore allow what he revealed to stand while we leave him to rot.

Perhaps we do more harm than good by perpetuating the tools of these people’s abuse. Perhaps we are contributing to the pain felt by Carlebach and Cosby’s victims, who for so long were denied justice, by touting the instruments of their abuse as something worthy of praise and enjoyment. Perhaps we make those men that much more acceptable by refusing to give up what they created simply because our lives are enriched by the fruits of those poisonous trees.

Or maybe there’s a baby to be saved somewhere in the putrid bathwater. Maybe there’s a message, some truth, a little good that can be salvaged from these men’s abominable lives. Might the message not be valid regardless of its source? Can we not keep the moral values Cosby preached while damning the damaged he caused to 17 (and counting) women, or the love and acceptance exhorted by Carlebach while distancing ourselves from the man himself and his actions.

There are a million answers to these questions, and frankly I haven’t found mine yet. It’s something I struggle with every time I hear one of Carlebach’s songs, or see the popularity people like Eitan Katz, or Yehuda Green have because of their similarities in musical style to Carlebach. I still feel dirty and conflicted when I sit in shul and hear one of Carlebach’s tunes used for lecha dodi (Song to greet the Sabbath sung by Friday night prayers), finding myself at once moved and repulsed. To be honest, I still use those tunes myself when I lead the prayers, because I know the congregation likes them and will sing along. I don’t know what the balance should be, or if there even is one to be had. Maybe you people can help me out; what do you all think?

75 thoughts on “Carlebach, Cosby, and Separating Art from Its Artist”